Did Netflix Cancel The Dragon Prince Season 4? Know Everything Here !!! 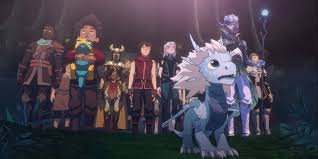 ‘The Dragon Prince’ series is about a fantasy world on the continent of Xadia which is rich in magic and derived from six primary elements: the Sun, Moon, Stars, Sky, Earth, and Ocean. Dragon Prince is a popular American-Canadian series that grasped a lot of attention for its fantasy comedy. It is a computer-animated series represents the magical world and story of childhood. This web series is created by Aaron Ehasz and Justin Richmond, produced by Wonderstorm and animated by Bardel Entertainment.

The series was released on Netflix. The first season was released on September 14th, 2018 including 9 episodes and the running time of each episode is 27-30 mints. The second season was released on February 15th, 2019, and the third season on November 22nd, 2019 including 9 episodes in each season, and the running time of the individual episode is less than half an hour. We can expect the release of season 4 in 2021 on Netflix. But there’s no danger of cancellation. We will let you know one-time the date is committed.

Season 4 is about saving the dragon prince from Viren and returning him to Xadia. Elves wage war against the human race. Will Callum, Rayla, and Ezran stop the war? Will the peace be restored? We’ll know the answers in season 4.

Xadia is full of magical powers, dragons, elves, and humans. Since humans don’t have magical powers, they began using dark magic. As a consequence, they were sent to the west, and the continent was split into two by a massive river of lava.

This is the best series to watch for entertainment which will drag you into an adventurous, magical world. It has got positive comments for its colorful animation, and the average rating is 8.6 out of 10.