Re Zero is an anime television series adaption by White Fox which aired in the year 2016. The series is an adaptation from the 2012 Japanese novel series Re Zero: Starting Life in Another World written by Tappei Nagatsuki. The anime series succeeded in stealing the heart of the fans. The story is about a boy named Natsuki Subaru who just loved playing games. But suddenly the boy is taken to another world without his knowledge. Then a special power of the boy revealed that he can die and relive the moments leading up to it.

Though the series gained large popularity, it took more than 2 years to create its sequel.

The story-line of Re Zero: Season 2

The season 1 ends with the victory of Natsuki Subaru over the Witch cult and the Sin Archbishop of Sloth. Season 2 is expected to continue the story just after this battle. As it is an adaptation of the novel series, the story-line can be predicted based on that. If the makers move at the same pace then the audience will soon meet Echidna The Witch of Greed.

If this happens then many new characters can be seen in the anime series with the Witch.

Though the viewers are waiting to know what will happen next, the season 2 anime will be worth waiting for. Even the novel has been read by many of the viewers, this visual series is a must to watch.

Re Zero Season 2 Release Date, Cast And What Can We Expect out of The Series

The popular anime, Re Zero, started streaming in 2016. Although it got many viewers and the show was really successful, it is taking a long time to renew. Here’s every minute detail that you need to know about the show.

When Will Re Zero Season 2 Release?

The second season of the show was supposed to hit the screens in April 2020. However, this can’t happen now. The Coronavirus pandemic has stopped the show’s production, and it was not able to complete. So there is a delay in the premier of Re Zero season 2.

The Fox studio already announced the news about the show getting postponed on March 9, 2020. But the fans are really fortunate enough. The show’s creators announced that they are planning to release the show in July 2020. But on which date of July 2020?? Well, the information isn’t revealed yet. But it’s really great news for the viewers that it will finally release after a lot of waits.

Who Are All In The Cast of Re Zero Season 2?

Rem, Emilia, and Subaru Natsuki, Wilhelm van Astrea and Roswaal L Mathers are some important cast members returning for the second season. There are some more characters of course. But we’ll get to know about that one the show is out.

What Can We Expect out of The Series??? The plot

The series is an adaptation from a manga of the same name, and season two’s plot is expected to run from its volume ten to fifteen. Thus, as per the story of these volumes, we will get to see the reunion of Emilia and Roswaal. In addition, there’s also an appearance of the witch of greed, Echidna.

Future, as the show moves ahead there’s a scene in which Roswaal gets a severe injury. Thus, he gives all his responsibilities of the Trails of the Sanctuary to Subaru. Now it will be interesting to see how Subaru handles the responsibilities? What problems does he face in doing that? Will Roswaal get cured? All these questions can be answered only when the show releases.

Re: Zero – Starting Life in Another World Season 2: Release date, Plot, And You might want to know !!! 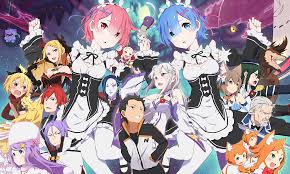 The formal Internet Site for the Re: Zero Starting Life In Another World anime has introduced that the Re: Zero Season 2 release date is being scheduled for July 2020, the summer 2020 anime season.

Kadokawa announced an anime television series adaptation in July 2015. Masaharu Watanabe and write-down direct the TV series by Masahiro Yokotani, with passion by the studio White Fox. Kyuta Sakai is serving as both role designer and as chief animation director. Kenichiro Suehiro composes music for the series.

Subaru Natsuki is a not in education nor employed who does nothing but play games. One night, after visiting a convenience market, he is suddenly summoned to another world. With no sign of who asked him, he soon befriends a silver-haired half-elf girl who introduces herself as Satella and her companion Puck. After that, the whole life changes for Natsuki.

It was initially run on 4 April 2016- Present. With 25 episodes in the first season.

Anime follower will need to wait a little longer to watch Re: Zero Starting Life In Another World Season 2. The anime was initially scheduled for earlier in 2020, but it was delayed due to the COVID 19 epidemic.

The White Fox staff explained that the delay was due to some of the production being outsourced to Chinese companies. But the wait is soon to be End with the announcement of the dates of release of the season 2.